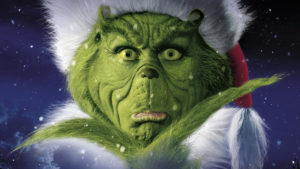 You know the story.  Green guy named Grinch hates Christmas and steals all the presents from the Whos in Whoville.  Afterward, he sits comfortably perched above their town on the hill, waiting for them to be completely miserable because of his theft and ransacking of their homes, but instead he hears something unexpected.  They sing.  They sing loudly and beautifully with joy in the hearts and the feeling of true blessing in their souls.  Turns out he couldn’t steal the true meaning of Christmas from them.

We all know a Grinch in the office.  They are just miserable people.  They complain frequently and whine with an ease that 2-year olds would envy.  Yes, the Grinch in the office can create quite the disturbance in a meeting or attempt to derail any form of pleasure others take from the work they do.

How to spot the Grinch:  (as if I need to tell you)

How to deal with a Grinch at work

It’s pretty easy to spot the Grinch at work when it’s someone else.  It’s harder when it’s you.  We’ve all been a Grinch a time or two.  Commit this holiday season to smile a little more, recognize others for their contribution, and regardless of how this year has worked out revenue wise, demonstrate the type of deep appreciation and gratitude that makes your whole team want to sing.

Wishing each of you a joyful and blessed holiday season.  You certainly inspire me to sing out loud to share the appreciation I have for allowing me to do the work that I love with some of the most generous, smart, courageous, and successful people I could imagine…yes, that’s you!  Thank you!