Thank you for paying for your assessment.  IF YOU DO NOT HAVE TIME TO TAKE THE ASSESSMENT RIGHT NOW, SAVE THE LINK TO THIS PAGE  in order to return to it later.

The following link is for your Cortex Talent Insights DISC assessment. There are no right or wrong answers. The purpose of these types of assessments is to determine a leader’s strengths and how they can best be leveraged to serve their organization and team.

Do NOT share this page or the below link with ANYONE. You will be billed for any additional assessments taken on your link.

Please set aside around 40 minutes of time where you can take the assessment without interruption. We will send you your results after you complete your assessment. All you need to do is click the link and follow the instructions.

Behavioral research suggests that the most effective people are those who understand themselves, both their strengths and weaknesses, so they can develop strategies to meet the demands of their environment. This report measures the four dimensions of normal behavior: dominance, influence, steadiness and compliance.

To purchase this assessment, click the ‘Buy Now’ button below. After paying – Click “Return to MERCHANT”, at the bottom of the payment page, to receive your link. Do NOT share your link with anyone else. You will be billed for any additional assessments taken on your link.

CLICK “buy now” to purchase your DISC assessment for $69.

To purchase this assessment, click the ‘Buy Now’ button below. After paying – Click “Return to MERCHANT”, at the bottom of the payment page, to receive your link. Do NOT share your link with anyone else. You will be billed for any additional assessments taken on your link.

CLICK “buy now” to purchase your DISC and Motivators assessment for $89.

Similar to the usual DISC and Motivators assessment, but with more of a focus on your sales skills. The Sales Skills Index shows how you stack up to proven sales professionals. You will be presented questions that portray “real life” sales situations to determine your sales expertise. By comparing their responses to proven sales professionals, a report is generated showing strengths, weaknesses and how you understand sales strategy in seven categories.

To purchase this assessment, click the ‘Buy Now’ Button below. After paying – Click “Return to MERCHANT”, at the bottom of the payment page, to receive your link. Do NOT share your link with anyone else. You will be billed for any additional assessments taken on your link.

CLICK “buy now” to purchase your SALES DISC and Motivators assessment for $89.

The ultimate assessment, includes both DISC and Motivators, as well as 25 leadership competencies. An individual’s hierarchy of competencies is key to their success, and knowing what they are is essential to reaching their goals. This report is designed to assist managing and developing a career. For many jobs, interpersonal skills are as important as technical skills in producing superior performance.

To purchase this assessment, click the ‘Buy Now’ Button below. After paying – Click “Return to MERCHANT”, at the bottom of the payment page, to receive your link. Do NOT share your link with anyone else. You will be billed for any additional assessments taken on your link.

CLICK “buy now” to purchase your TriMetrix DNA Assessment for $109.

Thank you for your purchase! Here is your DISC assessment link! Below is your link. Please do not share this link with anyone. If multiple assessments are taken, you will be charged.

There’s a part of being emotionally intelligent that is key to leaders successfully creating collaborative outcomes and it would appear, from my experience with thousands of them in training and executive coaching sessions, to be the portion know as “self management.”

Emotional intelligence is defined as the ability of individuals to recognize their own and other people’s emotions, to discriminate between different feelings and label them appropriately, and to use emotional information to guide thinking and behavior.  Basically, it’s your “people” skills.  The characteristics include self-awareness, self-regulation, motivation, empathy, and social skills.  Daniel Goleman, a psychologist, developed the framework for it.  Many organizations use assessments that measure your level of development in each of the skills.  Studies of indicated that emotional intelligence is a higher indicator of success, in many areas, than even a person’s IQ.  Here’s a nice article to compare the two for you.

Discipline is defined as:  the practice of training people to obey rules or a code of behavior, using punishment to correct disobedience.  Discipline used to be something that was coveted.  The concept was honored and honorable.  It still is when it applies to having a perfectly sculpted body (one thing I may never see in the mirror).  Everyone seems to want one of those these days and will go to great lengths to have one.

Emotional discipline, though, is something that we may not be focusing quite enough on right now and could be the missing key that unlocks the outcomes we want to achieve.  The leaders I have coached and admired have emotional discipline, which I have found to mean that they don’t always do what they want to do, or say what they want to say, when they want to say it.  They don’t always react in anger when they have full justification to do so.  They don’t do tasks when they feel like it, but rather when they have them scheduled to happen.

Leaders that possess emotional discipline have an impulse, quite frequently, to run the other way when the super tough decisions need to be made, and yet they don’t.  They stand up, when others sit down, and they speak their truth in the face of criticism and sometimes serious consequences.

For those of you that are familiar with the DISC behavioral styles here are some areas that each of us may have an opportunity to develop emotional discipline in regard to:

Drivers – may have an impulse to over-confidently say exactly what’s on their mind, with little contemplation. They may speak from the “gut” and may not give consideration to how it lands on peers and team members.

Influencers – may have an impulse to avoid needed conversations and situations if they feel like they could result in a possible conflict, or deterioration of a relationship or a how much a person likes them.

Calculators – may have an impulse to NOT communicate instead of communicating.  Calculators can sometimes be more comfortable in their office with “time to think” instead of seeking others’ opinions.

When the rules of emotional discipline aren’t followed there are consequences for the leader, their team and their organization.  They might include and certainly aren’t limited to their team loosing respect and trust in them.  A lack of emotional discipline may lead to lack luster results because a leader did what they felt like doing in meetings and during important interactions with others, rather than calling out unproductive behaviors. Maybe customer centric standards aren’t kept because it’s easier to overlook poor performance than it is to inspire excellence every day.

We all have work to do to right this ship and make emotional discipline as sexy and common place again as it used to be, when we celebrated and were more attracted to a leader taking a moment to quietly contemplate their answer than blurting out the first thing that came to their mind before the other person was even finished talking.

Here are some things to discuss with your team this week:

This article can also be viewed on the TTI website here. TTI SI, Target Training International – Success Insights, is the provider for our DISC assessments and the industry leader in understanding the science behind them.

At Cortex Leadership Consulting (www.cortexleadership.com) we provide DISC, Motivators, Leadership Competency, Stress, 360 degree and Team Accountability assessments along with workshops and leadership programs to assist you and your team to reach your peak performance.  You can contact us at [email protected] or (540) 776-9219 to book a workshop for your team, a customized leadership program for your organization or schedule a keynote speech.

If you would like to receive the Leader’s Launch List, each week, in your email inbox, go to www.lyndamcnuttfoster.com.

Each of these assessments delivers vital information to help you quickly assess the strengths and weaknesses of your team members and leaders. Using a proven Cortex method, these assessments based on real science will move you to a more efficient and effective way to pin point exactly what and who you need to focus on to create optimal performance from your team.

TTI Success Insights (TTI SI) believes all people are unique and have talents and skills of which they are often unaware. TTI SI and its network of Value Added Associates, like Cortex Leadership Consulting, exist to reveal and harness these talents, using the Science of Self.

Over three decades, TTI SI has researched and applied social and brain science, creating assessment solutions consultants in 90 countries and 40 languages used to hire, develop and retain the best talent in the world. TTI SI assessments are at work in the Fortune 1000 companies and have worked with over 100,000 companies over the years.
TTI SI tools are EEOC and OFCCP compliant and are continuously tested and refined to ensure the highest standards of ethics and reliability, which is why Cortex has chosen to use TTI.

TTI Success Insights® believes there are five dimensions of a superior performer that can be measured by our research-based assessments:
• Behaviors
• Motivators
• Acumen
• Competencies
• Emotional Intelligence

Who you are, what you do and how you do it.

Our Behaviors/DISC assessment is key in helping people understand HOW they behave and their ability to interact effectively with others in work and life, as well as how they respond to the following challenges:

• Problems and challenges
• Influencing others
• Pace of environment
• Rules and procedures

To see a sample of our in-depth 23-page DISC Assessment Report, click here.

Becoming self aware is the first step on your leadership journal.

The provider we use, TTI Insights, were the first DISC providers to guide companies from the prospective employee stage to selection, from on- board training to job-related development.

More importantly, TTI SI is the only provider of DISC assessments in the marketplace that generates 384 unique reports, based on both the high and low scores revealed in each individual’s two DISC graphs (natural style graph and adapted style graph).

In other words, TTI not only studies the behaviors that come naturally to the respondent — both how they act (Behaviors) and why they act a certain way (Motivators) — but we also analyze and present the less dominant behaviors. Developing these less dominant behaviors presents opportunities for self-improvement and greater understanding. Where other companies only provide a snapshot of an individual, we provide a full picture to gain a greater understanding of self and others.

In addition, TTI SI is constantly running internal studies, including the study of adverse impact and is conduct- ing test-retest analysis to validate and to improve our products. These steps allow our suite of assessments to remain at the forefront of innovation and stand the test of time.

Motivators, based on Eduard Spranger’s theory of human motivation, are the windows through which an individual views the world. These intrinsic motivations explain the key driving forces about someone’s on-the-job performance and why they act a certain way. 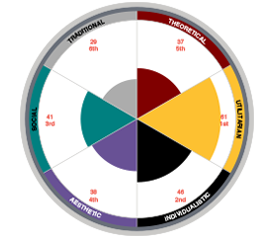 To see a sample of our in-depth 23-page Motivators Assessment Report, click here.