What do you say at work when it’s hard to find the right words.

There is no shortage of information out there on how we should do things – the theories people and experts have on how bosses, leaders, and employees should treat eachother.  But what do you actually say when you’re confronted by someone at work?

Lynda McNutt Foster, CEO and Executive Coach of Cortex Leadership Consulting joined Kianna Price, Morning Anchor on WFXR News for Living Local to tell us what to say at work when it’s not easy to find the right words.

Kianna: There are dozens of articles written by coaches, journalists, experts, specialists that come up in my feed everyday on LinkedIn.  Why is it so easy for us to understand what we’re supposed to do in a situation and so hard for us to find the words to say the right thing in stressful or uncomfortable situations at work?

Lynda: Because the emotional part of our brain and the part that formulates our words are different, so the stronger we feel something the harder it is to express ourselves.  It’s like when we feel in “love” with someone but it’s sometimes hard to describe that to someone else.  Imagine when you’re angry… the words are hard to come by.

Kianna: So if I’m in my bosses office and they say something to be that I do not think is true about my work, what should I say at that very moment?

Lynda: When faced with any situation that triggers you it is always best to do two things.  One is to BREATHE – gets oxygen to your brain which it needs to think. Second, try and ask a question for clarification.  For instance, you might say:  Can you tell me more?  Or Help me to understand… can you give me an example of that?

Kianna: How about when a coworker says something a meeting that upsets you?

Lynda: Try taking a deep breath and determining whether it needs to be addressed at that moment or not.  If it does, because otherwise the project or what you are talking about could go in what you think is the wrong direction, try saying:  From my perspective… from my point of view, here’s how I am seeing it.  You could also try asking, “What’s your biggest concern right now?”  Normally when people are having high emotions their brain is telling them something is wrong or there is a problem to be aware of.  Inviting what concerns they have can help reduce the person’s anxiety.

If you want to be more productive, you’ll want to increase the amount of dopamine in your brain.  Dopamine is a neurotransmitter (chemical) that produces motivation and strong feelings of pleasurable anticipation.  When we are looking forward to something good that is going to happen or get what we consider to be a reward, of some kind, the brain releases dopamine. 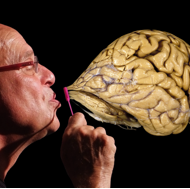 When dopamine is high, we process incoming information more quickly.  It’s easier for us to change and adapt to new things.  Dopamine makes us feel happy so we’re more pleasant and optimistic.  The bigger reward we are looking forward to, the greater the brain activity.  This is why setting small, obtainable goals, works.  Hit a goal, get a quick shot of dopamine.  Anticipate getting to your desired outcome, or deeply significant big reward, and just the anticipation can increase dopamine.

Here are some ways to be more productive by utilizing the levels of dopamine in your brain:

END_OF_DOCUMENT_TOKEN_TO_BE_REPLACED

There’s a new report out about the state of miscommunication at work from Quantum Workplace.  The findings are interesting.

47-51% of respondents agreed that employees always or almost always speak their minds, which means 49-53% of employees are not speaking their minds at work.

END_OF_DOCUMENT_TOKEN_TO_BE_REPLACED

It can be tough to work with rude people at work.  That’s the topic we are covering in this week’s Virginia at Work segment written and reported on by Bill Wadell at WFXR news.  Here’s the script for the news segment that will appear on tonight’s 10pm news.  At the end look for 3 great ways to handle someone rude at your workplace.

Anchor:  The weekend is over.  Chances are you or someone you work with will be battling the Monday blues in the morning.  For some, a cup of coffee or a good joke turns everything around.  Other’s may bring a bad attitude for the day or the whole week. Bill Wadell shows us how a rude attitude can bring everyone down in tonight’s Virginia at Work.

Bill Wadell:  Whether a construction sit, a busy office, a factory or a store, chances are there’s at least one boss or worker known for their attitude.

Lynda: “I think it’s important for people to have good relationships in the workplace and to know what you think is rude and what someone else thinks is rude. So depending on your behavioral style, it really makes a big difference.”

Bill Wadell:  Some of us brush off a rude attitude or cold shoulder.  Others will dwell about it for days.  Lynda McNutt Foster says one bad apple can spoil a bunch.

Lynda:  “It’s not just about the boss. If you have rude coworkers. Even one, they can set the tone for the entire day for everybody on the team.”

Bill Wadell:  What is it like where you work?  Friendly and upbeat?  Or crass and filled with complainers?

Lynda:   “Culture is just how we do things around here, and if rudeness is accepted and it’s not discussed in any way and it sort of gets out of hand and becomes the culture, productivity can go way down. I mean do you really want to work with someone you consider to be rude do you daily?”

Bill Wadell:  Whether it’s venting, complaining, overhearing conversations or not respecting personal space, the situation can be worse in close work spaces.

Lynda:  “Think about cubicle world right now. You’ve got people sitting next to each other in cubicles. Can you imagine sitting next to someone for 40 hours a week that you consider to be rude. not pleasant.”

Bill Wadell:  It’s much more than just feelings.  A rude leader or coworker can drag down production and morale.  That can cost the business money, growth and even good employees start looking for a new job.

Lynda:  “We think oh, it’s just isolated to this one person. No, that one person is affecting the happiness, the satisfaction of everyone else in their department. and they’re probably doing work around around that person which is highly inefficient.”

Difficult people at work are tough because you probably need to make a living which is why you are having to put up with the person.  Remember, though, they may also be having to put up with you as well, perhaps.  You can, of course, file a complaint when the behavior is out of bounds.  You can also choose to change departments or leave the organization if the situation is causing you to lose sleep, change your demeanor in a negative way, or find yourself consumed with being annoyed by the person on a regular basis.  You are not in control of other people’s actions.  You are in control of how you respond, though.

For situations where you think or believe that improvement is possible, here are 3 ways to handle a rude coworker.

Consider this from Will Smith.