Try this Path to Problem Solving this week 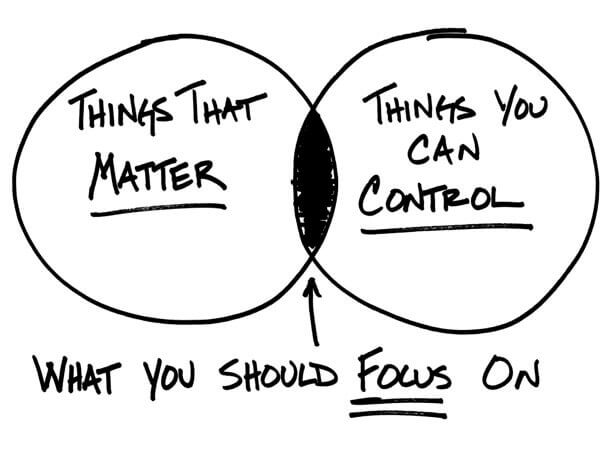 It can be confusing.  One minute you need to smooth over an upset team member.  The next, you need to hit a deadline on a report that is due.  You need to jump on a conference call and send out an email to that customer that wants a quick response.  You get to Friday and it feels like nothing truly important got done.  A month can go by you’re still battling the same issues you did last quarter.  What are you supposed to focus on?  Is it what the customer wants?  Or is it what you promised your team member you would get done? Maybe the most important task is getting that report that was due last week finished and sent out?

It’s easy to say you need to focus on the intersection between what truly matters and that which you can control.  It is much harder to pinpoint exactly what those things are and most importantly, to execute them.

Begin with the end in mind by filling in the blanks because it’s important to create clarity before trying to solve any problem you are facing:

Try this if you are stuck.

If all else fails, do this.

Finally, it’s important to remember that competence breeds confidence.  You got this!

A few years ago, a leader in one of our classes… let’s call him Tom, was having a tough time with employees on his team.  During coaching sessions, I noticed that there was a common theme to the team member’s feedback about his behaviors towards them.  They were consistently saying the same things like, he didn’t give them credit for their ideas when he presented them to corporate.  From their perspective some thought he was inconsistent – they would be called out for something they thought was minor and then other times he would completely overlook something they would have thought was a major infraction.  Still other comments were around the perceptions that Tom was constantly late to meetings he had set with them and when he did show up he was on his phone checking email the whole time.

Yes, employees would like to make more money, for the most part.  Yes, they would like to have more flexible work hours.  Certainly they want benefits if possible.  Yes, to all those things AND there is one thing that they want the most from their boss.  You probably guessed it already, RESPECT.

The research is in and the information may be helpful for us to review.  This article from Inc. magazine was the first source I used for this one.  When employees feel they are respected by their leaders the positive outcomes include:

If you’re a manager, you may not feel like one all the time, but you are a leader.  If you coordinate projects, you are leading others.  When you are influencing decisions you are leading.  Rather than focusing on people respecting or not respecting us, perhaps we need to look inside ourselves and wonder what things we are and can be doing to let the people that we work with feel respected by us.

Here are some quick thoughts on how to show respect to others you lead at work:

If you’re someone who doesn’t feel like you’re respected at work, the above will probably go a long way to getting more respect if you give more of it.

Here are some quick tips on how to gain more respect:

If all of this talk about respect has made you dying to hear Aretha Franklin’s song, Respect.  HERE IT IS!

Oh, you know you want to SING IT OUT LOUD and dance around right now!  Oh yeah…just do it!